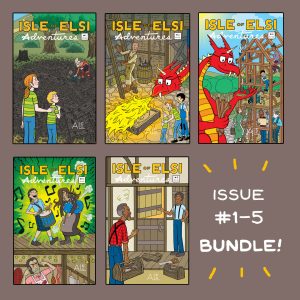 Alec Longstreth’s award-winning, Eisner-nominated webcomic for kids is now being published as an ongoing comic book!

You can now get issues #1-5 all in one fell swoop! The bundle is discounted, so you save some money, compared to buying issues individually. * Previously known as the “pre-order pack.” 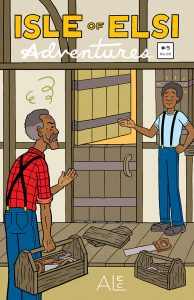 Issue 4 reprints the storyline Randy Remarf in the Door Dilemma in its entirety!

For the first time in his carpentry career, Randy Remarf gets to build a door all by himself! When Randy boldly tries out some new techniques, the villagers love the end results, but his Dad is far from impressed. It takes an intergenerational intervention to help this father and son see eye to eye! 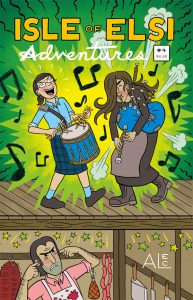 Issue 4 reprints the storyline Liz Tekcar in The Contested Contest in its entirety!

Teenage town clerk Liz Tekcar is put in charge of a contest to create a dragon head replica for the local theater. When the villagers use unexpected materials for their entries, Liz must think quickly to find a solution that will satisfy the town council. As if this wasn’t enough to deal with, she also has to find a new place for her band to rehearse! 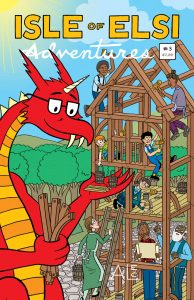 Issue #3 of Isle of Elsi Adventures picks up right where Issue #2 left off, collecting pages 73-106  of Sally Sanders in the Egalliv Examiner.

In this final installment of the story, the townsfolk of Egalliv must work together to rebuild their local theater. Their first collaborative performance in the space helps save Nogard the Dragon from the mysterious Mr. Wits. This issue includes two pages of behind the scenes photos from Alec’s process and a dragon picture book recommendation! 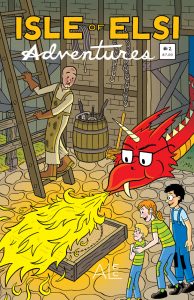 Issue #2 of Isle of Elsi Adventures picks up right where Issue #1 left off, collecting pages 37-72  of Sally Sanders in the Egalliv Examiner.

When Sally follows Rex to the dragon cave in the woods above town, she is followed by the mysterious Mr. Witts, who tells everyone what they are up to! Witts vows to return to Egalliv in three days to take Nogard the dragon away. Can Sally and Rex find a way to fix the town’s problems and save the dragon before time runs out? Find out in this exciting installment!

Alec Longstreth’s award-winning, Eisner-nominated webcomic for kids is now being published as an ongoing comic book!

Issue #1 picks up right where Book One left off and collects the first 36 pages of Sally Sanders in the Egalliv Examiner.

After a dragon attacks her village, Sally Sanders helps the Drab family start a newspaper and immediately gets to work as their first investigative reporter! Repairs to the town’s buildings are stalled, there is a stranger in town, and Sally’s best friend Rex is acting very strangely… In this issue Sally begins snooping around to try and solve these mysteries! 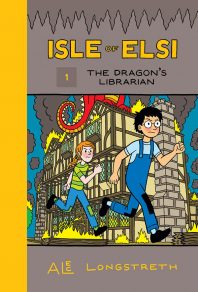 Isle of Elsi: The Dragon’s Librarian (Book One)

Available in print, and as a digital eBook! 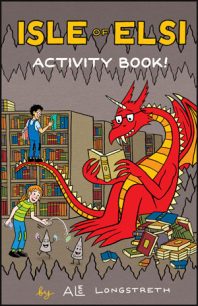 As a bonus, all activity books will ship with a free Isle of Elsi bookmark and postcard!

Available in print, and as a digital eBook!